The village of Riverside was envisioned and developed in 1869 by a group of businessmen who organized themselves into the Riverside Improvement Company (RIC). The RIC believed that the citizens of Chicago would be looking outside the city limits for cleaner, quieter and more spacious home sites. To this end, the RIC secured 1,600 acres along the Des Plaines River, 9 miles from the center of Chicago, and hired Frederick Law Olmsted (then the most famous landscape architect in America) to create a “village in a park.”
Once construction for homes, a hotel and other infrastructure was underway, the RIC realized a place of worship was needed for those visiting on weekends from Chicago. For this, Olmsted chose the corner of Barrypoint and Scottswood Roads for a church, although the location was serving as a cemetery known as Flat Creek Cemetery. The site was cleared and the cemetery was relocated to Wolf and Joliet Roads. 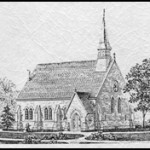 In 1869, a small church of uncut limestone and a slate roof providing seating capacity for 300 was built and named “Stone Chapel.” This non-denominational “Union” church hosted Presbyterians, Episcopalians and other protestant church groups taking turns arranging for Sunday services.

On the verge of financial ruin, the RIC was forced to mortgage the Stone Chapel. Presbyterians began meeting in the Refectory Building at the Riverside Hotel while the Episcopalians rented the church.
Presbyterians Purchase Stone Chapel

In 1872, arrangements were made for the Presbyterians to take over the Stone Chapel. Fifteen members entered into a covenant under the name of Presbyterian Church of Riverside and gained admission into the Presbytery of Chicago. Presbyterian Church of Riverside is the first church entered on the Cook County books after the Great Chicago Fire of 1871. The first acting pastor, Rev. Trowbridge, was paid $750 for six months of service. Sunday School began in 1875 with a congregation of 48 members. In 1878, the church bought the Stone Chapel from the mortgage holders for $2,500, most of which was contributed by church members.

Months later, in 1879, a fire broke out during Sunday Services due to a defective flue. The building burned almost to the ground. Only a few sections of wall remained standing, including the tower entrance. An architect was hired immediately and the church was rebuilt in the Gothic style. Workmen were able to use most of the stone from the original chapel. 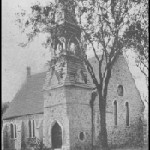 The newly built church was completed in 1880, with seating that faced south. Rev. Trowbridge served as acting pastor for 14 years until 1885.

In 1888, Rev. Sneed joined the church and Professor and Mrs. A.F. Ames became members. Prof. Ames was the first Superintendent of Schools and he and Mrs. Ames were valued members as they served actively for many years. The Ames family has been members for 4 generations — Prof. Ames’ daughter, Harriet Ames Carlson, was a member for 84 years. Her daughter, Harriet C. Kweton (wife of the late Elmer Kweton) has been a member for her entire life. 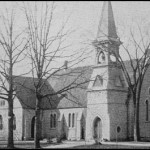 Church Parlors Added
In 1879, the church parlors were added to the south of the sanctuary to accommodate Sunday School Services at a cost of $3,000. The Ladies Aid Society contributed $500 to the Building Fund and also furnished the Parlors.

Rev. Snyder was very interested in his parishioners and often visited them at home. He reported to the Session that a member was drunk during his home visit. Consequently, the member was asked to appear before the Session but failed several times to respond, so was voted to be dismissed by the church.

In 1896, the congregation had grown to 177 and expansion was necessary. Riverside architect, Charles Whittlesey, altered the shape and size of the sanctuary. The original plan placed the organ and pulpit on the south wall. The new plan called for custom-made curved pews facing the west wall, the way it remains today. Seating for 400 and the manse was added. Ladies Aid Society donated $1000 of the $1,200 construction cost.

For 13 years, Dr. Herman Jenkins served and increased membership from 175 to 210. By 1912, the treasurer reported that the “general condition of finances is perhaps in more prosperous condition than ever existed before.”

Mrs. Ames organized a group of young people to meet in her home for Bible study in 1913. They later moved to the church and became known as the “Round Table.”

In 1923, membership stood at 361 and the mortgage (from additions) was almost eliminated. 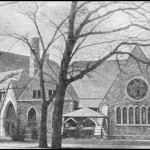 Once again, the Ladies Aid Society made a charitable contribution by donating a vacant lot on Barrypoint Road from the south of the church property 76 feet for a cost $2,500. The Session was very appreciative and accepted this generous gift. In 1923, plans were drawn up for the new Community House to be built on that lot. (The Community House was completed in 1928 for $110,000 and was dedicated to Christian Education, and the social and recreational activities of the congregation and community.)

In 1925, Rev. Waldo, Pastor of RPC, founded the North Gate Sunday School, which was organized in the A.F. Ames School. There was no church serving this part of town and a general lack of transportation. For over 13 years, Rev. Waldo conducted the Devotional Service of the Sunday School in addition to pastoral service in the community. 95 people became members of RPC via the North Gate Sunday School since this organization was formed and overseen by the RPC Session. In March 1926, the North Gate Group acquired lots on Nuttall Road (a bond issue was floated for these lots at a price of $4,200) but funds were needed to build a church. Realizing how much good work the women could do if properly organized, Pastor Waldo wrote the following appeal in the RPC Vision, May 2,1926:

“’The Northgate Ladies Aid Society’”: How would that sound? Or something like it, by another name, if you please? It would do immense good; build up our membership; promote friendliness and sociability; raise funds to meet our bond payment obligations. How about it, you good women? Consider it. Do it! Do it now!”

This urgent appeal brought results: 35 women met and formed the Northgate Woman’s Society. They contributed generously to the church, aided the Sunday School, donated funds for Bibles, paid taxes each year on the church lots, and more. Unfortunately, the Great Depression hit and changed the economic situation. The Trustees realized the community could not finance the proposed church building on Nuttall and sold the lots in 1938. At that time it was decided to hold the North Gate Sunday School at RPC. The last A.F. Ames School service was June 1938.

Construction of the new Community House caused the church to suffer terrible debt, with over $38,000 in unpaid bonds and notes. A “Debt Retirement Fund” was started and over $25,000 was raised.

Rev. Waldo retired in 1937 with 24 years of ministry service to RPC increasing the membership from 193 to 608 during his tenure.

In 1964, another devastating fire broke out in the foyer of the Community House and spread mostly up the open wood staircases of that building causing $250,000 in damage. The 36 year-old south wing was gutted but the historic stone sanctuary was saved. The congregation voted for an architecturally modern building, not the 1928 plan.

In 1981, an Endowment Fund was created with a $20,000 donation given by an anonymous member. This Fund allowed the Church a steady flow of money. The Church dream was to have $1,000,000 by the year 2000, although the dream never became a reality.

RPC has been served by 23 ministers and has survived two World Wars, the Great Depression and two devastating fires. Join us for our second century in Riverside, Illinois!